Activities are mainly offshore with circa 12% onshore, largely in the Amazonian area. Much of the offshore activity is in deep water and naturally divided into three basins : 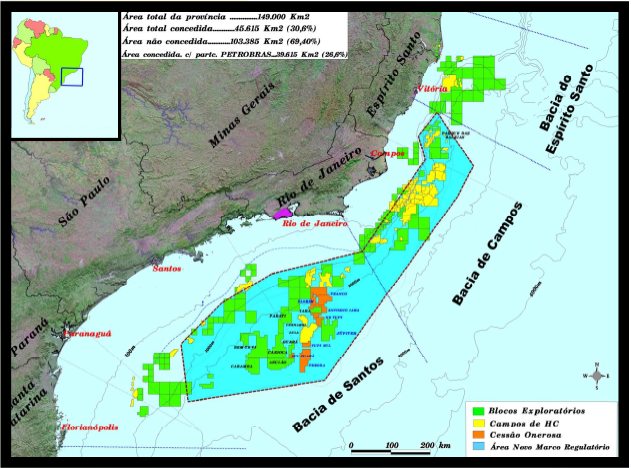 Bacia do Espirito Santo was a natural expansion northwards whilst to the south is the Bacia de Santos. These basins contain the huge ‘Pre-Sal’ (Pre-Salt) finds like the giant Lula (Tupi) field which is in water depth of 2,170 m/7,160 ft and the even larger Libra field. Production via FPSOs from Lula is underway with further development  scheduled. BG have a 25% stake in this field and they project extensive use of FPSOs in this area in the next five years : 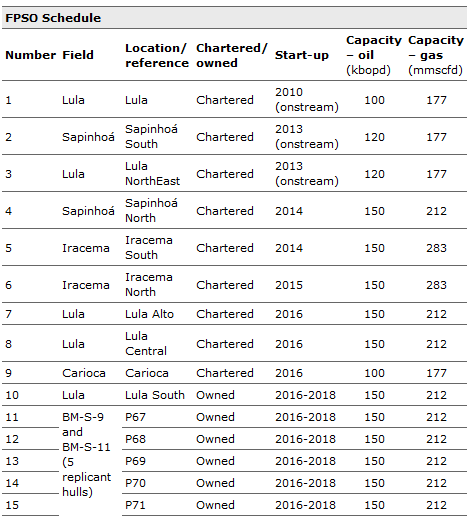 To quote the BG website: “BG Group has interests in four blocks in the Santos Basin, offshore Brazil. The exploration success, scale of resources discovered and production performance in the Santos Basin to date have been exceptional.” 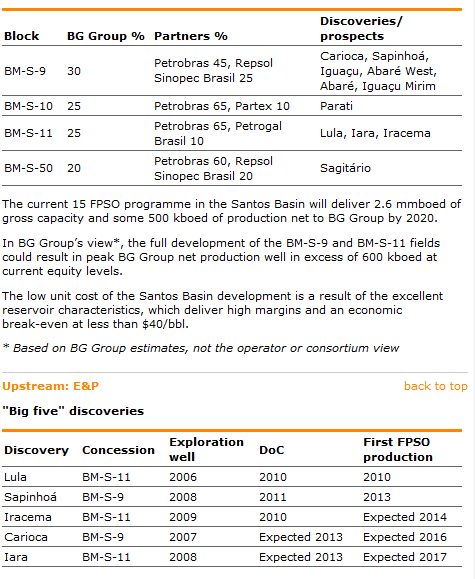 To give further perspective to the scale of offshore operations in Brazil the undernoted graphic was produced by The Stewart Group. As will be seen South America (largely Brazil) accounts for 16% of the global PSV fleet, just behind the North Sea at 19% which it should be noted also includes Barents/Baltic fleets.

There has been a 12.6% increase in the South American fleet in the past year compared to a North Sea fleet increase of 2.7% in that period. 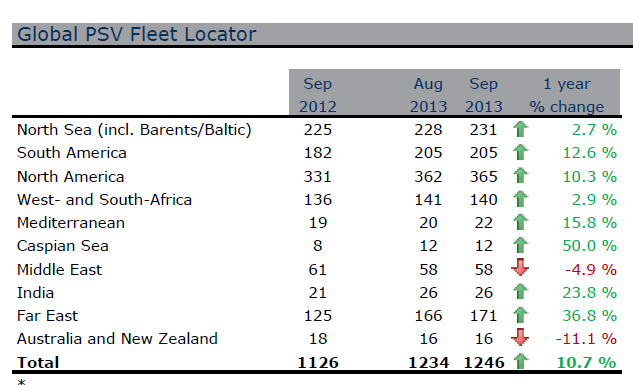 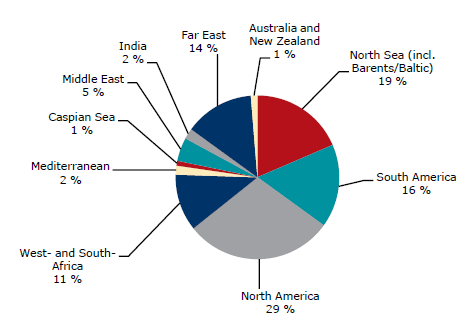 Onshore support infrastructure is centred on Macae, just north of Rio de Janeiro, but due to a lack of port facilities there has been extensive use made of the ports of Rio de Janeiro and Niteroi by the IOCs and other companies. Exploration and development to the north and south utilises facilities in geographically appropriate ports like Vitoria and Santos.

Petrobras are the 7th biggest energy company in the world (Source: PFC Energy January 2013). With a presence in 25 countries, Petrobras is world-renowned for the use of ultra-deep water oil exploration technology but is also a fully integrated energy company.

Despite the entry of IOCs, Petrobras are still the main driver of activity in Brazil and this is likely to continue. The Petrobras Business Plan issued in March 2013 sets out a huge investment programme (US$236.7 billion) for the period 2013-2017 and a planned doubling of production. 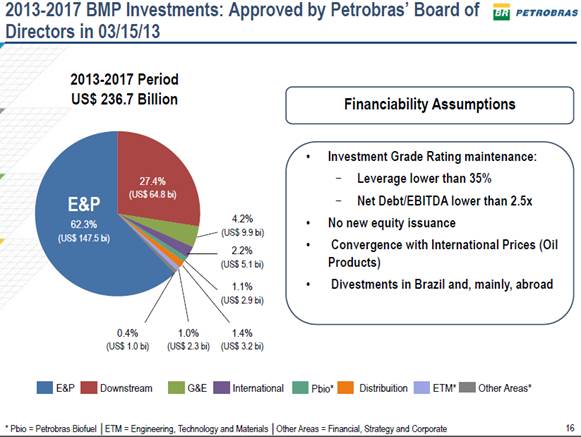 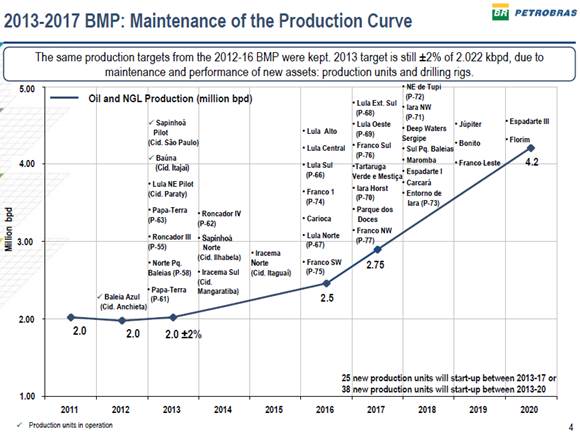 This is also being underpinned by exploration success : 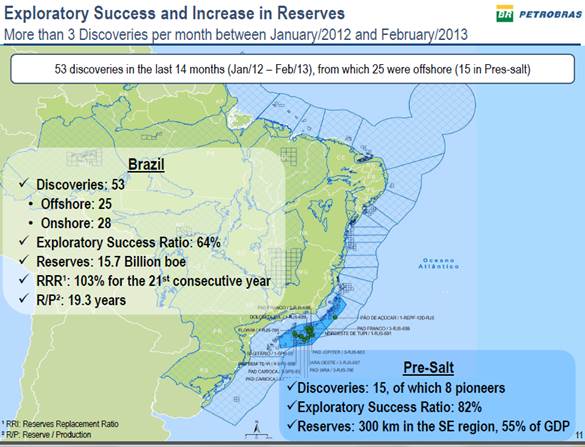 The increasing activity has generated a need for all kinds of support resources – here are projections for future marine requirements : 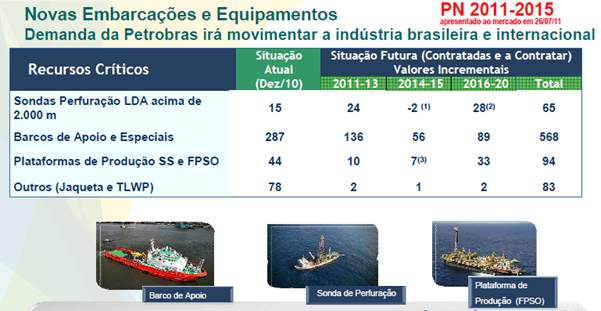 At the same time Petrobras has a number of initiatives underway aimed at optimising resources and achieving cost savings. For example the PROCOP project has ambitious targets :

CENPES (Centro de Pesquisas Leopoldo Américo Miguez de Mello) is the Petrobras unit for research and development. The unit has responsibility for working with universities and research centres and examining and approving new technologies.

International oil companies (IOCs) have had a presence in Brazil for many years but it is only in the past decade or so that they have been allowed to move into exploration, production and development activities.

A number of companies already have offshore production underway :

Additionally development is underway on projects like Papa Terra (Chevron).

BG are major partners of Petrobras in the Lula (Tupi) field as noted earlier. BP entered the offshore sector through the US$ 7 billion acquisition of assets in Brazil, Azerbaijan and the US deepwater Gulf of Mexico in March 2010.

Other IOCs in Brazil include :

These include the major player OGX, part of the Eike Batista group of companies and currently subject to much speculation regarding future ownership after serious financial problems at recently emerged. Others include :

The pre-salt Libra field in the Santos Basin was been made available for licence through a bidding process that resulted in a number of IOCs withdrawing from the process for a variety of reasons including cost and risk. BG, BP, Chevron and Exxon-Mobil are all reported to have declined to participate in the auction.

The field is seen as likely to be one of the most substantial developments in Brazil with extensive drilling and development required with estimated recoverable reserves of between 8 billion and 12 billion barrels of oil.

It has been reported that eleven (11) companies qualified for the auction – likely to form into bidding groups – but only one bid was finally made. The companies who got to this stage are  understood to be :

The winning bid of $6.88 billion, reported to be the minimum allowed under the law, came from a group made up of :

It is also understood that the group undertook as part of their bid to spend at least $280 million on further exploration of the field.