“Decision: Rio Investments 2012-2014 is a study, prepared since 1995, of investments planned for the next three year period for the state of Rio de Janeiro, carried out in conjunction with investors.

Its purpose is to show investment trends and present business opportunities to decision-makers in the public and private sectors, as well as broadcasting nationally and internationally the opportunities existing in the state of Rio de Janeiro, and therefore attracting new investors to the state.

The Executive Summary brings you the main conclusions of the full study. Here you find straightforward information about the investments for the state of Rio de Janeiro from 2012 to 2014 and a highlight on the main projects.”

Rio de Janeiro has advanced enormously over the past decade with thriving social and economic development. The per capita income for the country’s second-largest economy has more than doubled since 2000, surpassing the national average. In addition, the state continues to make a name for itself on the international scene. In fact, Rio de Janeiro is recognized as a leading destination for foreign tourists in Brazil, is a national and international benchmark in the audio-visual sector and has made clear advances in public security, in particular with the setting up of the police peacekeeping units in the state capital, which will host the 2014 FIFA World Cup and the 2016 Olympic and Paralympic Games. At the same time, it is the largest national producer of oil and gas, with oil reserves comparable to those of the world’s major oil-producing countries. With regard to logistic infrastructure, Rio de Janeiro also boasts a significant differential, allowing access to 50% of Brazilian GDP within a radius of 500 km, thanks to good quality roads, an extensive rail network and its ports and airports. Situated in an extremely privileged location, the state already stands out as one of the major logistics hubs in the country, being responsible for a large proportion of the movement of Brazilian cargo and passengers.

Add to this exceptional situation the fact that Rio de Janeiro boasts the largest concentration of investments per square kilometer in the world, offering numerous new business opportunities, as already pointed out in the Decision: Rio Investments 2011-2013 study. For the 2012-2014 period, the investments are going to be even greater.

In fact, Rio de Janeiro will receive US$ 120.0 billion in investments in the next three-year period. Despite the importance of sectors like oil and gas, energy, shipbuilding, steel and automotive, it is the investments in logistics that stand out. This sector accounts for US$ 12.1 billion of the total, 80.6% more than the amount recorded for the 2011-2013 period. These investments will have an enormous impact on the economy of Rio de Janeiro, serving as important leverage for the attraction of new ventures, and stimulating, at a later stage, population growth caused due to the increased demand for labor by the companies that have set up operations. Thus, being able to rely on an extensive, top-quality logistics infrastructure will open up opportunities for the installation of industries, commercial establishments and service providers.

The logistics infrastructure under construction will be particularly important for supporting major on-going developments, such as Comperj and the Açu Port Industrial Complex, facilitating the shipping of products, labor mobility and the transportation of machines and pieces of equipment – often highly complex ones. In addition, it will be a key factor in attracting new investments to the state.

Due to the impact of the various investments in improvements and the expansion of the logistics infrastructure in Rio de Janeiro, the state will be able to reinforce its privileged location. National oil capital, international tourist center, venue for large sporting events and enjoying the biggest concentration of investments in the world, the state will earn another title: that of Brazil’s new logistics center, serving as a strategic international hub. This is why Rio de Janeiro will continue to offer excellent opportunities in various industry sectors for the coming years.

Every year the Sistema FIRJAN Economic Development and Associative Board, through its Industrial Competitiveness and Investments Division, organizes a study of investment intentions in the state of Rio de Janeiro with public and private investors for a forward-looking period of three years. Its goal is to gather all the information in a single document and present the main trends to decision-makers from the public and private sectors, making it the largest and most complete map of opportunities in Brazil.

This edition describes, in detail, the announced investments for the period 2012-2014, which reach the US$ 120 billion mark, and shows a state with large and diverse opportunities in the short, medium and long term. The document you are reading is the executive summary of the Decision: Rio Investments 2012-2014 full version, which can be found on the website www.firjan.org.br/decisionrio. It includes, in addition to the traditional Google Earth mapping, details of the major investments and a special section on the 2016 Olympic Games, as well as more information on other investments with a high probability of taking place in the state in the near future.

By undertaking and offering this mapping to investors and the general public, the Sistema FIRJAN is sure that it is contributing to the economic development of the state of Rio de Janeiro and attracting new investments to Brazil. With all of this, Rio de Janeiro will certainly become no longer just another option but a definite decision.

Investments announced for the period 2012-2014 in Rio de Janeiro

US$ 120.0 billion in investments has been announced for the state of Rio de Janeiro between 2012 and 2014, representing an increase of 17.6% compared to what was forecast for the period 2011-2013. This amount is made up of public and private investments, both domestic and foreign. Of the total, 70.1% (US$ 84.1 billion) is related to industrial investments – the total amount of investments by the manufacturing industry, US$ 23.0 billion, and US$ 61.1 billion for Petrobras. 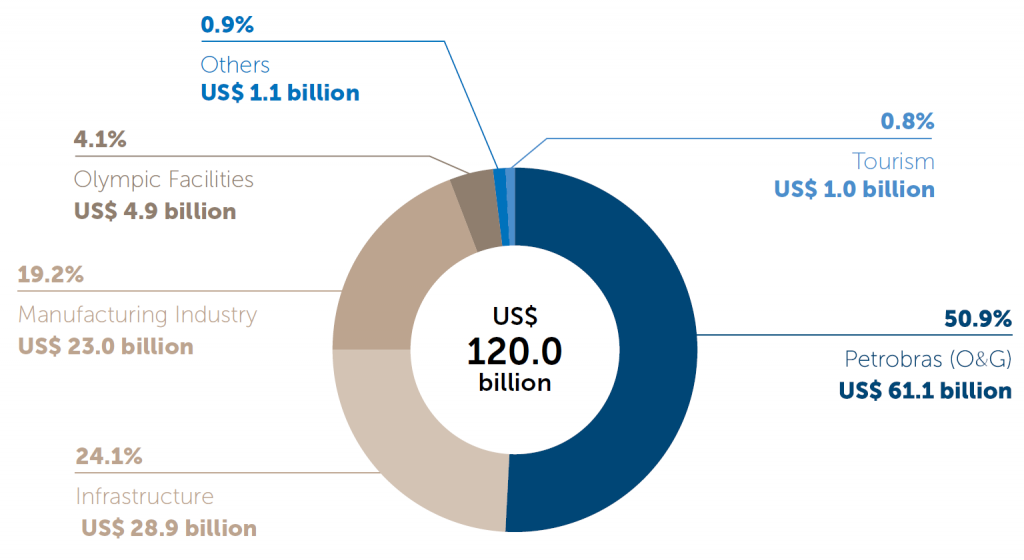 Among the various sectors that make up the manufacturing industry, the naval industry stands out with 38.0% of its total (US$ 8.8 billion). In addition to investments related to shipbuilding for a total of US$ 5.4 billion, there are also significant investments relating to the construction of the OSX shipyard for building platforms and support vessels (US$ 1.7 billion), in the Açu Port Industrial Complex, in São João da Barra, and of the Brazilian Navy’s submarine shipyard (US$ 1.2 billion), in Itaguaí.

The steel industry accounts for 24.8%, related to expansion of the Gerdau plant (Cosigua) in the city of Rio de Janeiro, and deployment of Ternium’s steel mill in São João da Barra, in the Açu Port Complex. The petrochemical sector also stands out, with 15.1% of this segment, led by construction of Comperj in Itaboraí. The automotive sector accounts, in turn, for 15.1% of total investments in the transformation industry, led by investments in the deployment of the Renault-Nissan factory in Resende and by the expansion of the PSA Peugeot Citroën factory in Porto Real.

In the urban development sector, two projects stand out: the Porto Maravilha project, that aims the revitalization of the Rio de Janeiro port retro-area (US$ 2.7 billion), and the Morar Carioca Program, for urbanization of Rio slums (US$ 1.2 billion). In the energy sector, highlights include the construction of the thermonuclear plant Angra 3 (US$ 4.1 billion) and the exploration and production of oil and gas by OGX (US$ 3.7 billion). Investments in sanitation are led by the State Company for Water and Sewage (Cedae) with projects valued at US$ 2.3 billion.

Among the US$ 120.0 billion announced, investments related to the 2014 FIFA World Cup and the 2016 Olympic and Paralympic Games represent US$ 10.1 billion, of which US$ 4.9 billion are included for projects announced (but not yet detailed) for the public and private sectors, including hotels, infrastructure and refurbishment/construction of Olympic facilities.

Investments related to the World Cup and the Olympic Games

It is also important to note the existence of dozens of investment projects of utmost importance and that, due to the stage of maturity, the availability of information and the timeline for execution – beyond the scope of this study – were classified as “potential”, and are therefore not included in the total of US$ 120.0 billion forecast for the period. Despite their exclusion from the total amount, they should be on the radar of investors because of the size of the opportunities that they might offer. For example:

There are also future opportunities associated with new developments and with the sporting events that the state of Rio de Janeiro will host, which investors should be aware of. For example:

The details of these potential investments as well as all other investments mapped by the Sistema FIRJAN, can be obtained in the complete version of Decision: Rio Investments 2012-2014, available at www.firjan.org.br/decisionrio.

The content, information and advice (“information”) on this page are those of our third party contributors and may not represent or reflect the views of Calibre International Limited. We do not endorse such content, information or advice and as such shall not (to the extent permitted by law) be liable for any reliance you may place upon the same.
'