Rio Grande do Sul – OFFSHORE INDUSTRY AND THE NAVAL CLUSTER

Although relatively new to Rio Grande do Sul, the offshore industry and the naval cluster are rapidly expanding in the state. Due to its strategic importance and potential for development, this sector ranks among the priority programs of the State Government. The State Department for Investment Development and Promotion (SDPI), and the Rio Grande do Sul’s Investment and Development Promotion Agency (AGDI) as its executive partner, promote actions aimed at attracting new investments, expanding the supply chain – taking advantage of the potential and capacity of Rio Grande do Sul’s industry – and promoting technological development in the maritime, oil and gas areas.

This publication aims to introduce an overview of this sector in the State, as well as its competitive advantages and the opportunities that result from the guidelines of the Brazilian government on resumption of the naval, oil and gas industry in the country. These investments are being leveraged by the discoveries of new oil fields in the pre-salt layer.

According to the monthly bulletin of the National Petroleum Agency – ANP (November 2012), of the total oil produced in Brazil, 91% corresponds to the exploration of offshore fields, which also accounts for 77% of the gas produced in the country. Of this total, the pre-salt layer production increased from 9% in October 2012 to 11% in the subsequent month, with consistent growth over the previous months. These figures demonstrate the success and the consolidation of the offshore technology and confirm that the sector has potential for expansion.

Although there are no oil fields in Rio Grande do Sul, the state is a leading provider of technology to this sector, and deals worth US$ 9,7 billion have already been agreed in the Complex of Rio Grande and US$ 794 million in naval cluster of Jacuí. Details of the naval cluster orders are provided below. 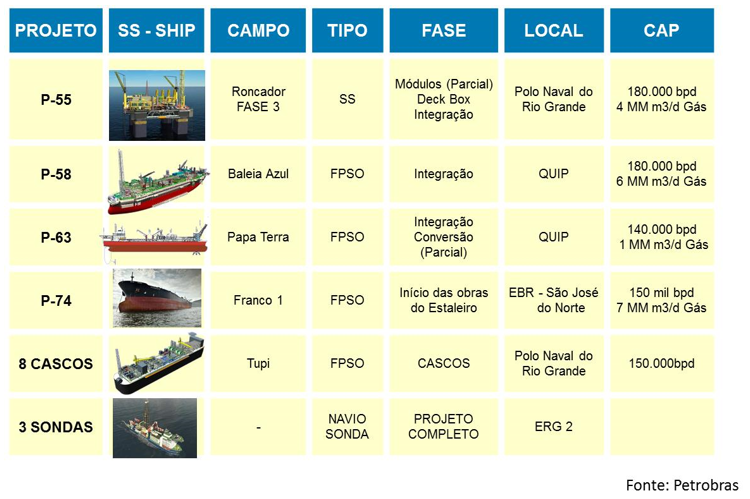 Considering the future demand until 2020 relative to vessels and offshore oil rigs, a study published in the Program for Mobilization of the National Oil and Natural Gas Industry (Prominp), in 2012, shows the following figures:

In this context, Rio Grande do Sul is a leading player in the offshore and maritime sector. With privileged logistics and expertise in relating and supporting sectors, the State is considered the new frontier of development of the offshore/naval sector in Brazil.

Because of the educational background of its population and the rate of development and quality of life, Rio Grande do Sul ranks first in labor quality, a production factor that is essential for the industry.

The above information is confirmed by the below comparison of state and Brazilian figures:

• 2nd center for plastics and rubber

• 2nd center for the manufacture of machinery and equipment

Regarding competitive advantages, it is also worth mentioning the technology parks that develop technological innovations with market orientation. Given the demand for national technologies that are implemented through federal actions within the scope of the ANP (minimum local content requirement determined by ANP for suppliers), a major development opportunity that shall be largely supported by technology parks can be seen. 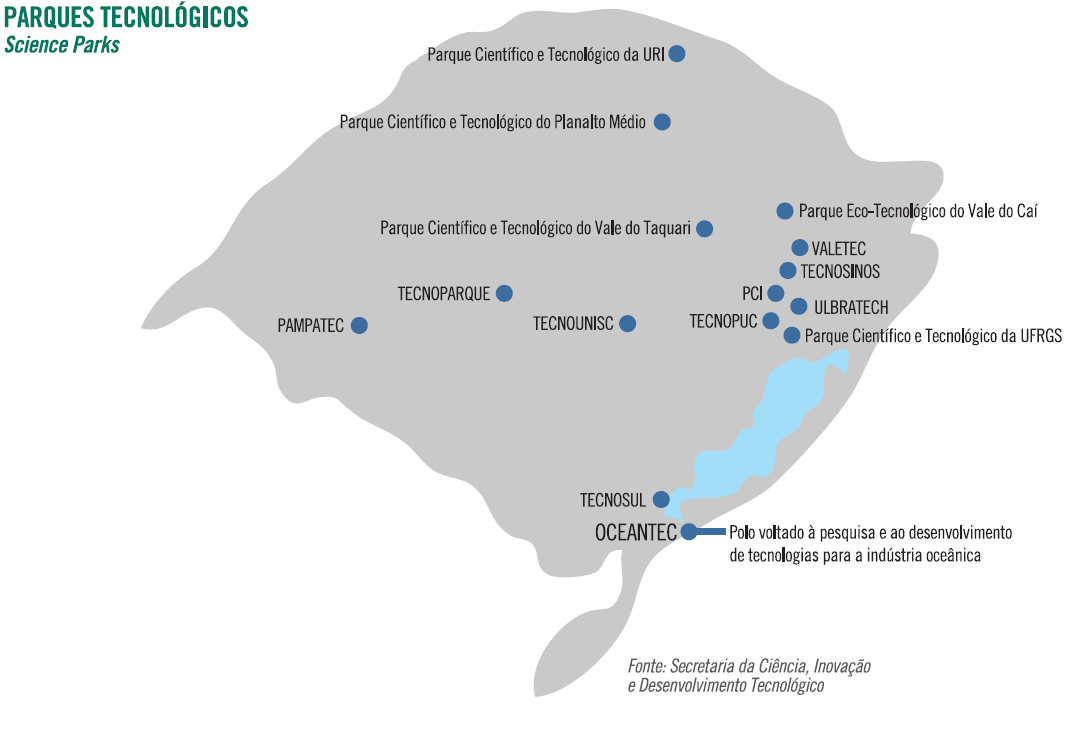 There is still much more to do regarding the development of the production chain for the naval, oil and gas industry, considering the extraction technology itself and all technologies to support production.

With the establishment of new shipyards at the State, and specially EPC companies (Engineering, Procurement and Construction), which develop the engineering, the supply and the construction of offshore units – there are clear opportunities for new ventures to meet the current and future demand in equipment construction.

According to a research by the National Union for the Construction, Ship Repair and Offshore Industry (Sinaval), the average percentage of nationalization, including oil tankers, PSVs (Platform Support Vessel) and FPSOs (Floating, Production, Storage and Offloading) is around 65% of the equipment cost structure. The study does not include maintenance of drilling rigs and other equipment, but it is known that the nationalization percentage is lower than the values informed. As a result, ANP is promoting periodic reviews of resolutions, aimed at providing new opportunities to local markets.

This reveals that there is much to do concerning the development of the production chain, particularly in high-technology items. Table below shows nationalization rate of some equipments.

In order to take the economic opportunities that the naval, oil and gas markets have brought to Brazil, the Rio Grande do Sul have been promoting actions to support new companies to this markets. Concerning this, the RS Offshore Industry Program was created by the decree13.710 of 2011, structuring the support and involving the government agents.

The program objectives include expanding and enhancing the benefits provided by the naval, oil and gas industry in Rio Grande do Sul, such as employment and income generation, social welfare and quality of life. The RS Indústria Oceânica also aims to promote research and development of technologies, involving the production chain of oil and gas, and reduce the environmental impacts that may be caused by such activities.

The work group of the RS Offshore Industry (RS Indústria Oceânica) works together with the team of Committee on Competitiveness in Oil, Gas, Naval and Offshore sectors (CCPGE) of the Federation of Industries of Rio Grande do Sul (FIERGS), unions and industries, aiming to integrate the actions and make them more effective and representative.

With a new wave of investments in the naval industry led by Petrobras, Rio Grande do Sul is seeing a return of investments in this industry. The city of Rio Grande, offering excellent operational conditions, received important investments of naval industry took advantage of the opportunities provided by this new economic scenario. Several shipyards started operations in the area and are in full operation, including QUIP, ERG1 and ERG2. Others are in project and installation phase like the Wilson Sons shipyard, which will focus on the construction of AHTSs (Anchor Handling Tug Supply) and harbour and ocean tugs.

The State of Rio Grande do Sul, recognising the real opportunities provided by the shipbuilding companies, encourages the installation of more industries of this sector in the city of Rio Grande and in other cities (a new shipyard, the EBR, is under construction in the city of São Jose do Norte).

This specific city, located at the east of Rio Grande, had never been previously properly analysed by the naval industry, but it has the same geographic advantages offered by the city of Rio Grande.

The Jacuí naval cluster comes with the objective of multiplying the capacities offered by several Rio Grande do Sul’s regions, exploring more efficient logistics for the large equipments, decentralising the industry and attracting new investments.

Created by the decree 49.492, of 2011, the naval cluster comprehends several cities, including Charqueadas, São Jerônimo, Triunfo, General Câmara and Taquari. There are already several investments consolidated in the cities of Charqueadas and Taquari.

Together with the already consolidated industry in the State of Rio Grande do Sul, this waterway acts as a synergy in developing the naval, oil and gas industries. 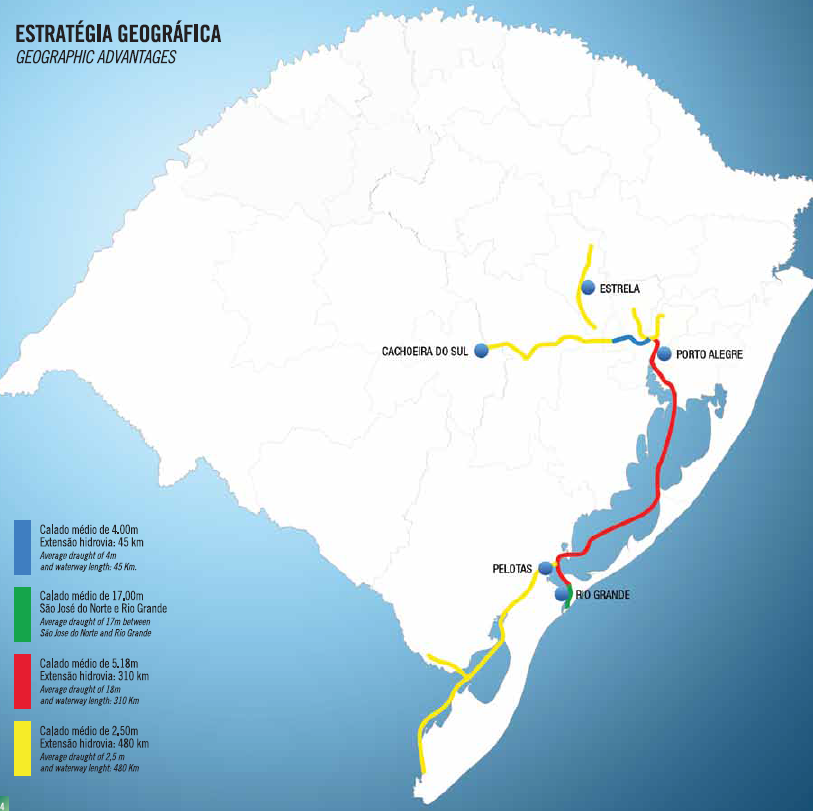 In partnership with the FIERGS, PROMINP and private companies, the State makes efforts to improve the ship industry work force’s qualification. The naval, oil and gas industries are directly involved in such programmes, with the purpose of assuring that the workforce meets the technical and professional requirements of those industries.

This is confirmed with the fact that 100% of the specialised workforce, qualified through those programmes, was absorbed. Within the 2011 and 2012 training programmes, 366 professionals were hired. For the 2013-2014 season, it is expected the qualification of 546 professionals.

With the purpose of improving the benefits of the naval, oil and gas industries, the State of Rio Grande do Sul promotes programmes to develop the supply chain. Among those programmes is the processes mapping of company that are capable of supplying to the oil and gas industries, the understanding of purchase policies of the anchor companies and the criteria to become a supplier and also the relationship of the anchor companies with the suppliers to understand the capacities and processes, as well as the potential demands.

There are a number of cases of nationalization of items by local companies and many of them have even developed their own technologies to operate in the naval industry.

• Economic information on the State of Rio Grande do Sul 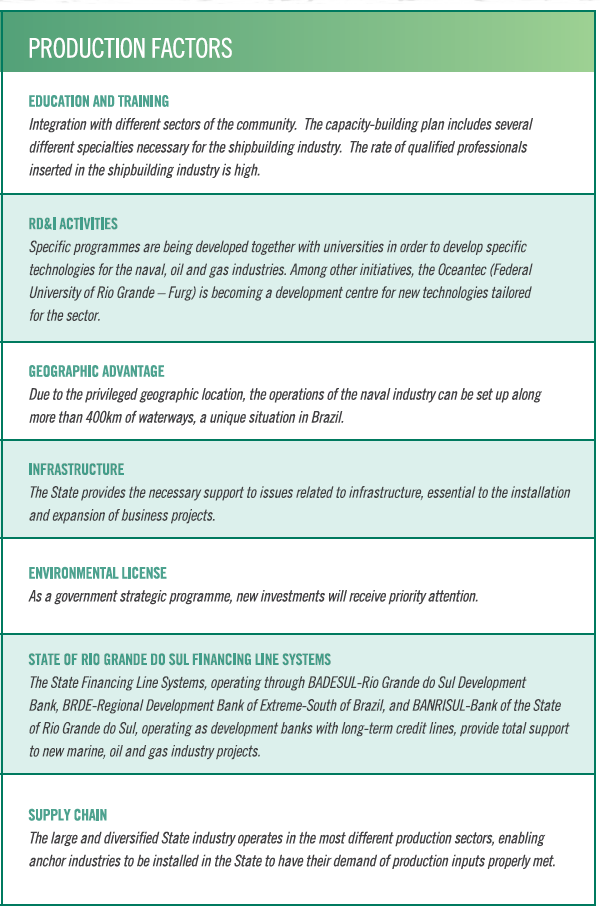 The focus now shall be on the continuous improvement on the conditions which allow the investment and the sustainable development. Such actions may be observed in the creation of proper infrastructure, workforce qualification, incentives for the exploration of the naval, oil and gas market by local companies and the creation of technologies developed in the State.

Above material courtesy of: